What exactly is a black hole? Is it a type of star? How big are they? Why are they called “black holes”?

A black hole is a region of space which has such an intense gravitational field, that not even light can escape it. They are some of the strangest and most interesting objects found in space. Albert Einstein was the first person to predict the existence of them, using his general theory of relativity. The name “black hole”, was given by John Wheeler in 1967, although the first one wasn’t discovered until 1971. 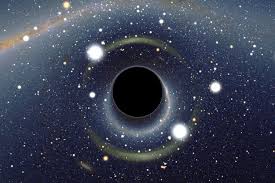 So how do black holes form? They are created when center of a massive star collapses. This happens when the gravity on themselves is greater than the external pressure caused by temperature. Not all collapsing stars turn into black holes, however. A black hole is determined by the Schwarzschild radius. If the radius of the collapsed star is smaller than the Schwarzschild radius, then it is officially considered a black hole. The event horizon is defined as “the point of no return”, and is a sphere with a radius the same size as the Schwarzschild radius. Once an object passes the event horizon, it can’t escape the gravitational pull of the black hole. Technically speaking, anything can become a black hole if it becomes dense enough. For the Earth to turn into a black hole, it would have to be compressed until it had a radius of 8.7 millimeters! At the center of a black hole, there lies something called a singularity. A singularity supposedly has zero size and infinite density. If an object were to fall into a black hole, then as it approached the singularity, it would become “spaghettified”, due to increasing gravitational pull on different parts of the object. 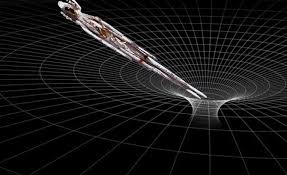 If the mass of an object was big enough so that the escape velocity exceeded the speed of light, we get a black hole. This is how they got the name “black hole”, as not even light can escape their gravitational pull!

What is the temperature of a Black Hole? Is it absolute zero? Are they infinitely hot? To answer these questions, we must consider interactions between particles and antiparticles. An antiparticle is defined is the “opposite” of a particle, and is the antimatter counterpart of a particle. Think of it as the difference between an electron and a positron. Particles and Antiparticles are created in random places within the black hole, due to Heisenberg’s uncertainty principle. 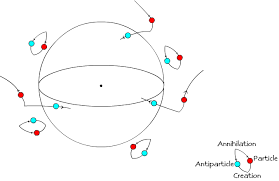 They often “cancel” each other out, but sometimes the pair separates, making the black hole seem like it’s radiating. This radiation can be used to determine the temperature of a black hole, which is defined by the following equation(Where ‘kB’ is Boltzmann’s constant, and ‘h’ is Planck’s constant):

What defines a black hole?

If you enjoyed reading this article, consider subscribing to TheRealSciBlog to check out more cool articles about emerging topics in science!